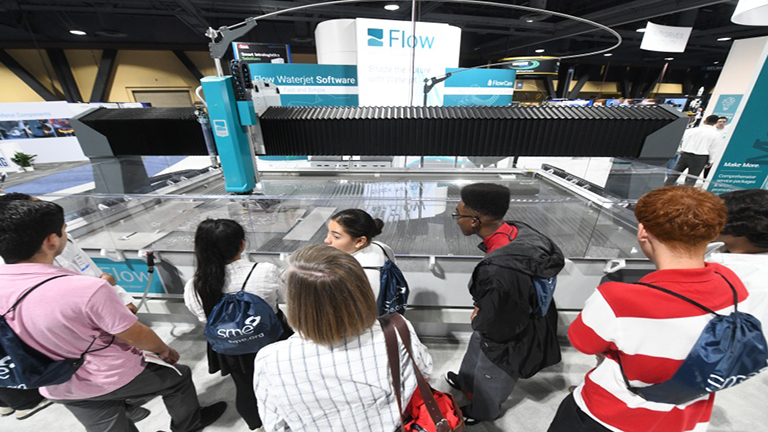 There are many exciting and meaningful opportunities for young people to explore within the skilled trades. The students at Kouts High School in Kouts, Indiana know that these careers offer plentiful, high-pay jobs that require shorter, less-expensive training.

“When I introduced the trip to FABTECH for the first time to the students, they thought it would be just another ‘dumb’ field trip. The thing is, there’s really no way that I’ve found to teach them about what they’re going to see at a show like FABTECH,” said Wayne Licthenberger, instructor of Manufacturing and Engineering at Kouts High School.

Students like juniors McGuire Crussen and James Meyer were amazed at what they saw at FABTECH.

“I really liked FABTECH. It showed me things I could instead of just going to college and entering a boring career,” said Crussen. “I want to be a machinist and so, it really helped me because I could find, like, careers and places to go work later on in my career.”

James Meyer’s understanding of manufacturing careers was a little cloudy. “I didn’t know much about the career opportunities. So, it was very interesting for me to go around and learn about all the stuff they do there and how it all works.”

The welding technology was a favorite of Meyer’s. “It was fun to watch how they did it and all of the types of machines that could do it. The way they use robots in welding was the most interesting part of my experience.”

James wanted to be an electrician before attending FABTECH. Now, after seeing all the latest welding technology, he’s not so sure. He says it’s a hard decision, but one that he is excited about making with one more year of school left to decide his future. 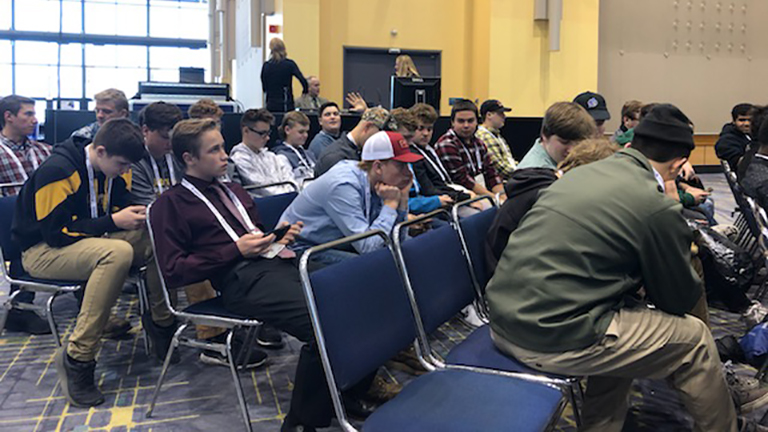 One of the main goals of the student summit event series is to inspire young people to consider a career within the manufacturing industry. The Kouts High School students all agree that their perception of manufacturing has changed after attending FABTECH. They said that after seeing how all the machines work together and how it all came together at the end was interesting. Especially, how all the stuff we have now is created and made.

The town of Kouts bills itself as a close-knit community built on character and pride with a population just under 2,000 according to the 2010 census. This year’s graduating class at Kouts will be around 60-65 students, says Lichtenberger. He sees tremendous opportunities within the manufacturing industry and tries to impart that vision onto his industrial technology students.

While teaching at another school, Lichtenberger coordinated a field trip for his middle school students to attend IMTS (International Manufacturing Technology Show). The students and the chaperones were amazed at the technology and career opportunities on display at the event. Lichtenberger knew he hit a spark and when the opportunity came about to take his current students to FABTECH, he set his plan into action.

“We were really fortunate that we were able to get a charter bus with the help of two companies in town, which really helped our trip out and allowed us to stay longer.”

One of the companies, SENSIT Technologies, has operations in nearby Valparaiso. The company designs, manufactures, and services gas leak detection instruments, combustible gas indicators and confined space monitors for the oil and gas industry. Licntenberger reported back to SENSIT on the success of the trip. “I just sent my contact at the company a picture of our winning team and thanked them again for their support. They were very excited to hear about the results. They said, ‘hey, you know, send us some of your seniors.’”

SENSIT told Lichtenberger that they need people that want a career in manufacturing and after seeing the opportunities available at FABTECH, Kouts will be sending some of their eager, young minds to apply for open positions.

Read Part 2, where we find out how the Kouts High School students took on the competition and won the racing challenge.