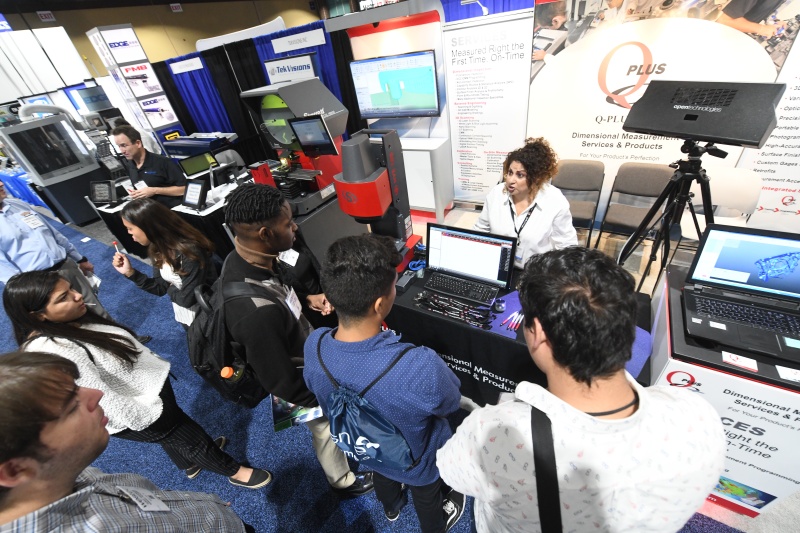 With Industry 4.0 ushering in new technologies and products, manufacturing process must adapt and change. Workforce development is key to keeping up with the constant change -- and talent shortages across the country do not help. The SME Education Foundation Student Summit event series is one solution that through student-centric programming, effectively addresses the misperception often held by young people that manufacturing is dull, dirty and dying.  Guided show-floor tours offer an up-close view of the high-tech nature of modern advanced manufacturing, and hands-on competitions like a specifically designed racing challenge give 16- and 17-year old students their taste of manufacturing.

The FABTECH Student Summit racing competition challenged student teams to engineer performance throughout the process of designing, building and then racing their 1:10 scale electric radio-controlled cars. With millions of different configurations for their race cars available, each team was scored on both the personal and team performance, along with each student’s individual race results. At the end of the day, Kouts High School from a small, close-knit community near Valparaiso, Indiana, came out ahead and won the competition.

“When we got done and they won, and we came back, and one of my students [Reece Heinhold] said,’Mr. L, aren’t you proud of us.’ I said, ‘Yes, I’m very proud of you,” said Kouts instructor Wayne Lichtenberger. “Reece said, ‘We’re just a small county school. We saw all of those big schools and we thought we were gonna get destroyed.’ I replied that you just never know. You do your best and see what happens…and they did.”

It’s not surprising that Reece Heinhold felt that way. Reece said, “Here at Kouts they offer an engineering and design class where you basically use a CAD program; we build a lot of models and things like that. So, during the competition that really helped me in designing the body for the race car. That’s what helped us get that perfect score.”

Reece Heinold’s favorite part of FABTECH was this racing challenge with the team designing and building the race car and competing against other high schools attending the Student Summit. “It really kind of made me happy knowing that I could help my team in that way because of the classes that are offered at these schools.” 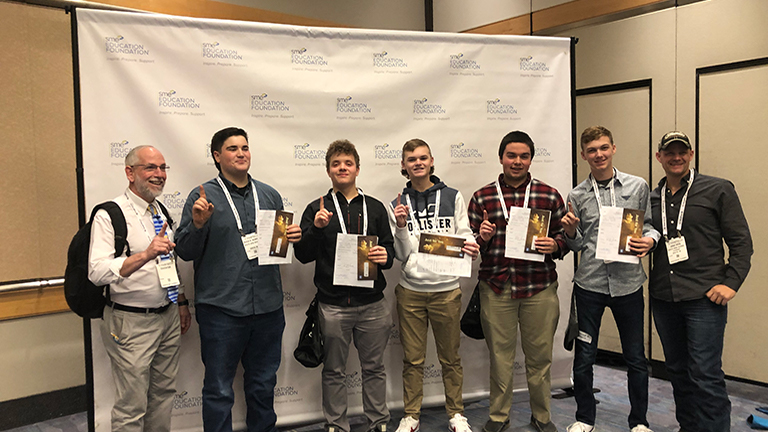 Reece is planning to head straight into the workforce after graduating high school this year. He’d like to be in machining. He likes that career mostly because of CAD. “I had a lot of fun with that and it’s my fourth year in the class. To be able to design my own parts and see them come to life: That’s really the most interesting for me.”

McGuire Crussen has been taking classes in machining and also finds it interesting. He thinks that FABTECH opened his eyes to CAD programs and different varieties of six and five-axis machines. McGuire also really enjoyed taking part in the crash test portion of the racing challenge. “I really liked the crash test because we had to use Microsoft Excel spreadsheets. I’ve never had any experience with that and so, it opened my eyes to new technology in the workforce.”

Mason Capouch didn’t think much about the competition. “I honestly thought we were going to get destroyed. I worked on the CAD with Reece and he taught me a lot during the competition, along with the other instructors there. It was really cool to see our car being built.”

While Mason and Reece worked on designing and building the car’s battery, James, McGuire and another member of the team, Kyle Dick, worked on the engine.

James specifically worked on the battery.  “I thought it was interesting how we did it -- and how the instructions showed us how to do certain things. Some of the things I didn’t know about, like using sand paper to get better contact on the wire.  I learned some pretty cool tricks about how to use a battery in different ways.”

At Kouts, the industrial technology students train on Autodesk Inventor CAD software, which is like the Solid Works software used at the racing challenge. Lichtenberger said that was an advantage to his students because there’s a little bit of knowledge transfer and familiarity.

Lichtenberger’s classes at Kouts feature an abundance of manufacturing projects and he strives to make them all hands-on. He wants to take his students to more events like FABTECH. “I love seeing the technology and the use of robotics and it just ties everything together for the kids. They hear about robotics, but unfortunately, we don’t have anything here that we can program as far as robotics go. But they watch this TV show that has battling robots and think that’s the application of robots, but that’s nowhere close. But, after attending events like FABTECH, now they get to see the application part.”

The industrial technology classes focus on cartesian grids and plotting points to show how manufacturing works and how machines think. “That’s how they get from point A to point B and that’s why it’s important to learn those things. My kids were amazed when they came back were just in awe of the all the technology, the use of lasers, robotics, and how everything fits together. It was kind of a final puzzle piece for them to see how this whole thing works.”

“It’s really cool to see how much robotics play a factor into manufacturing today. You started hearing about that not super long ago but knowing that a lot of the large-scale factories are going more and more with robotics these days just because of how accurate they were, and we got to see how accurate they were at the show,” said Reece Heinhold. “It was amazing seeing some of the machines, the jobs available and the what those workers were doing.”

Read Part 1, where we learn about the skilled trades careers that students at Kouts High School explored at FABTECH.