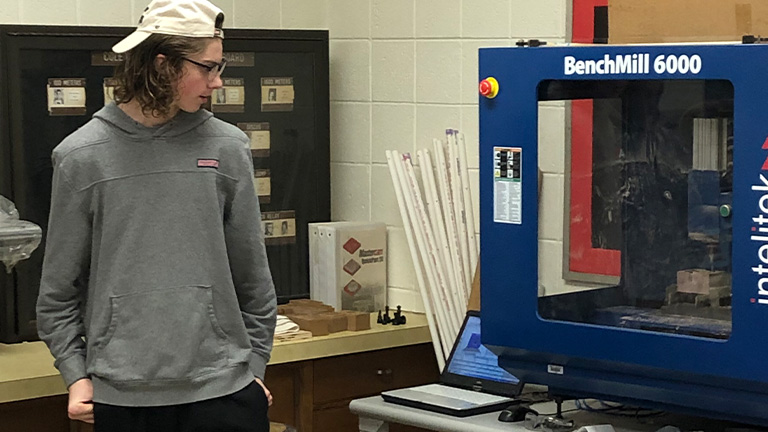 Cedar Falls High School (CFHS) has accrued many benefits from the SME Education Foundation’s PRIME (Partnership Response in Manufacturing Education) initiative since being accepted into the program.

Upon joining the PRIME network in 2013, the Iowa school received $35,000 over a three-year period. Then in 2018, PRIME provided the school with $8,000 for its annual week-long Summer Engineering Camp, where 20 middle-school students completed project-based activities such as model rockets, balsa bridges, ping pong ball launchers, a puzzle cube design challenge, an introduction to CAD and CAM designs, and VEX Robotics. They also toured the facilities of local manufacturing companies, including John Deere Engine Works, Viking Pump and Iowa Laser.

“We use our summer camp as a recruiting tool, and typically have a 90 to 100 percent retention rate in our engineering courses and/or robotics team,” says Dirk Homewood, who teaches Project Lead the Way courses for the Cedar Falls Community School District.

During 2018-19, CFHS was among 25 SME PRIME high schools across the nation — and primary and secondary schools around the world — that were selected to participate in the General Electric Additive Education Program’s introduction to additive manufacturing. As part of the program, CFHS secured a Dremel DigiLab 3D45 3D printer, and students gained access to software, curriculum and collaboration tools through the Polar Cloud — a community of students, educators and entrepreneurs who work together via a secure online platform. In addition to the printer and Polar Cloud tools, SME PRIME schools received additive manufacturing educational content and certification opportunities from Tooling U-SME, SME’s workforce education unit.

“I really feel like we’re on the forefront [of STEM education] at Cedar Falls, of setting the tone,” says Homewood. “We have a lot of schools that look to us, at what we’re doing.”

One of the things they’re doing is offering engineering and manufacturing classes in a specific sequence. In the first class, students take two-dimensional ideas and make them three-dimensional with CAD Autodesk and Inventor. In the next level, they bring their CAD ideas to fruition with prototyping machines. Third-level students try to prove why things work, making connections in areas such as kinematics, statics and thermodynamics. And in the fourth-level capstone class, students use what they learned in the first three levels to solve problems of their own choosing, often coming up with projects that benefit the school. For example, fourth-level students developed handicap-accessible green spaces, where students now gather for lunch at picnic tables.

In about four years, a newly constructed high school will replace the current one, which was built in the 1960s. In the new building, the engineering and manufacturing program will be prominently located in a central, high-visibility area, in stark contrast to its current location in the lower level of the old high school. Surrounded by glass windows that will allow parents and students to see the activity inside, the new area will consist of two classrooms separated by a maker space. SME’s local chapter advised CFHS about the type of technology it should put in place, including 3D printers, CNC machines and different types of robotic equipment. All of it will be accessible to the entire school district.

According to Homewood, SME has also had a dramatic impact on what CFHS currently teaches in the classroom, a consequence of bimonthly meetings with an advisory council that included SME’s local chapter as well as local manufacturers looking for specific skill sets. “A lot of our students are walking out the doors as seniors, able to have internships,” says Homewood. “They go off to college, then come back and have summer jobs.”

Some of those jobs are with John Deere, which offers 10 to 12 internships per year. Noting that the program is very competitive, Homewood says CFHS students typically get eight to 10 of the spots because John Deere “knows what we’re doing and how we’re doing it at Cedar Falls.”

Another local company, Viking Pump, has become a major partner of CFHS through the school’s Center for Advanced Professional Studies (CAPS) program, a preprofessional program that allows students to work on real-world projects with community businesses. “They’ve been taking some of their low-level projects that they don’t have enough engineers to do, and put our students on those,” says Homewood.

Also instrumental in CFHS’s journey to STEM leadership has been Kenton Swartley, community partnership and STEM facilitator for the Cedar Falls Community School District. As part of his responsibilities in that role, Swartley teaches the CAPS program’s robotics and engineering strand. He’s also been coaching the school district’s FIRST Robotics Competition team for about 20 years.

Swartley sees his teaching and coaching roles as supplemental to Homewood’s classes. “I think that Dirk’s work with the Project Lead the Way classes is a really critical foundation for our students. They gain the background there, the knowledge that they need to be successful, and then with the robotics team, that’s kind of a chance for students to get more in-depth and hands-on experience.

“I think one of the critical features is that they see both ends of the engineering and manufacturing process. We try to do everything in our shop that we can, whether it’s using hand tools or a CNC router and a couple of milling machines. It gives some of our students who are interested in engineering the chance to get their hands on some of those tools and machinery, so it gives them a new view of that whole process.”