This is the second in a series of articles related to the Saginaw (Michigan) ISD’s summer 2021 manufacturing camp.

Involvement of women has been a primary focus of the technology program at the Saginaw Intermediate School District (ISD), as was demonstrated at a manufacturing, engineering and welding summer camp sponsored by two ISD schools that are part of the SME PRIME (Partnership Response in Manufacturing Education) initiative. 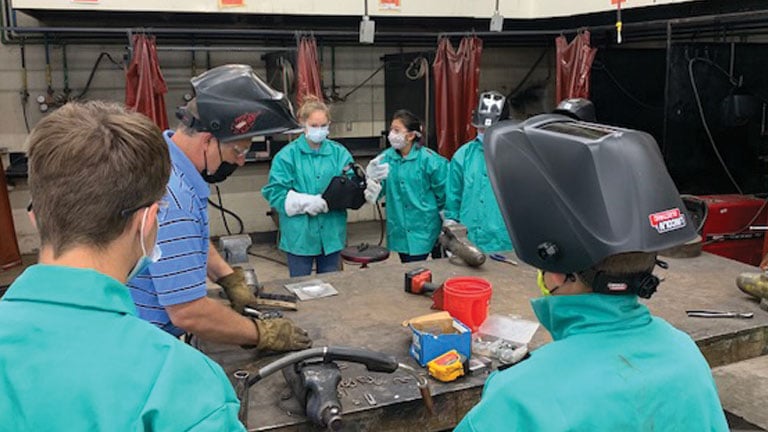 Held over three days at Hemlock High School and the Saginaw Career Complex, the camp attracted more than 40 students in 7th-12th grades.

“This year, one of the cool things is that we’ve gotten a strong group of girls involved in the program,” says Tom Lockwood, the Hemlock Public School District’s technology director, for whom the district’s Lockwood STEM Center was named. During the camp, he noted, “It’s nice to see that we’ve kind of forced everybody to do everything. We have girls who have done the welding stuff, and some of the best welders have been the girls. It’s going to take a long time to break down those barriers, but it is happening.”

Chad Starr, welding technology instructor at the Saginaw Career Complex, agrees that female students demonstrated their ability to hold their own — and more — in welding projects at the camp. “Their hand-eye coordination, I think, is a little better than men,” he says. “We had two juniors this year, and they did quite well. It’s nice to see.” 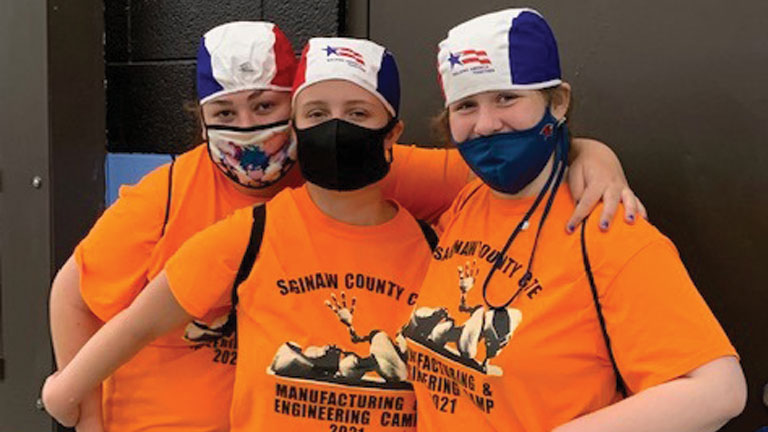 Amelia Bishop, a homeschooled camp attendee who will attend Heritage High School starting in ninth grade, says she got involved in welding “because I like to do hands-on stuff, adventurous stuff. I want to try a whole bunch of different things.”

Becca Gildenstern, a Freeland High School student who also attended the camp, says she’s “always been one to work with my hands and do something that wasn’t really ‘female-ish.’” A junior whose career ambitions are focused on engineering and welding, Becca says, “I like the satisfaction [with welding] of when you know you’re doing well and you know that you’re getting it all done.”

Ashlynn Wrona, a Hemlock High School junior, says her career aspirations have changed since attending the camp. “After having this experience, I realize how much opportunity I have, and how much I can do with my life. Building these skills in high school will make me highly coveted in the future.”

Morgan Walle, another junior at Hemlock, has also been rethinking her career aspirations since attending the camp. “It really made me think about looking into engineering — maybe being an electrical engineer,” she says.

Both Ashlynn and Morgan are members of Hemlock High’s Gray Matter Robotics Team. According to Ashlynn, she’s happy that her heavy involvement in robotics puts her in a position to help get other female students involved. “They just need a little bit of a push,” she says. “I’ve been talking to all my friends about joining Gray Matter, because it is a great place, and a very relaxing, comforting space where I don’t feel like I’m going to be discriminated against.”

Morgan says she became interested and involved in Gray Matter even though she thought it was something she would never be able to do. Noting that her sister was the first female driver on the Gray Matter team, she says, “it was a big milestone for our team, and hopefully we can continue that pattern in the future.”