Hemlock High School senior Ben Lockwood has gotten a promising start to a career in manufacturing with the help of the SME Education Foundation PRIME (Partnership Response in Manufacturing Education) initiative, a customized manufacturing/engineering program impacting students and teachers in high schools across the country by providing equipment, curriculum, professional development, scholarships, and STEM-focused extra-curricular activities. 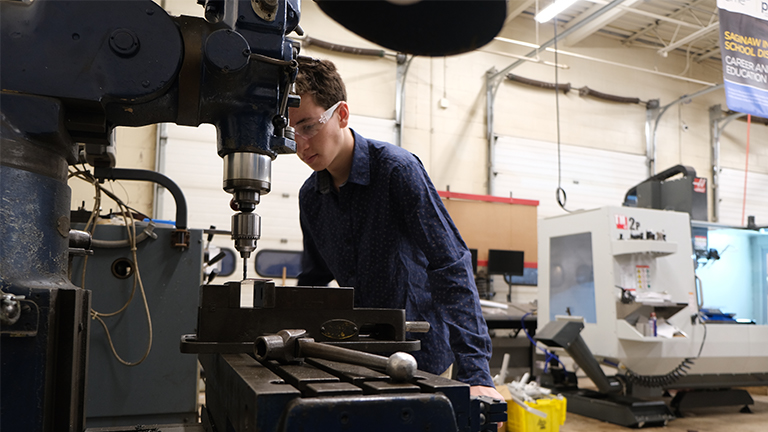 Hemlock’s donated manufacturing equipment has benefited Lockwood in a big way, given that it was provided to the school in his sophomore year. “It was perfect timing,” he says. “I’ve been able to use the machines almost throughout my entire high school career. Some of the machines, like the Haas mill and the plasma cutter, I’d never seen before. They’re really professional equipment, and it’s quite awesome that I’m able to have that experience.”

Having been involved with robotics since fifth grade, Lockwood began taking mechanical drawing in his freshman year at Hemlock — an SME PRIME high school in Saginaw, Michigan. “That really got me started in the 3D head space, understanding what hidden lines are and getting me exposed to the whole CAD thing,” he says. “And then my sophomore, junior and senior years I’ve been really involved with the Haas mill, and I became super-proficient at running it. I spend most of my free time now using the mill and the plasma cutter.”

In addition to using the school’s machinery to build a robot for competition, Lockwood used it to build a small stove and a ski bike. “We cut all the parts and we took the tires off of a bike, and then strapped downhill skis to the front and back of them,” he says. “That was a lot of fun.” 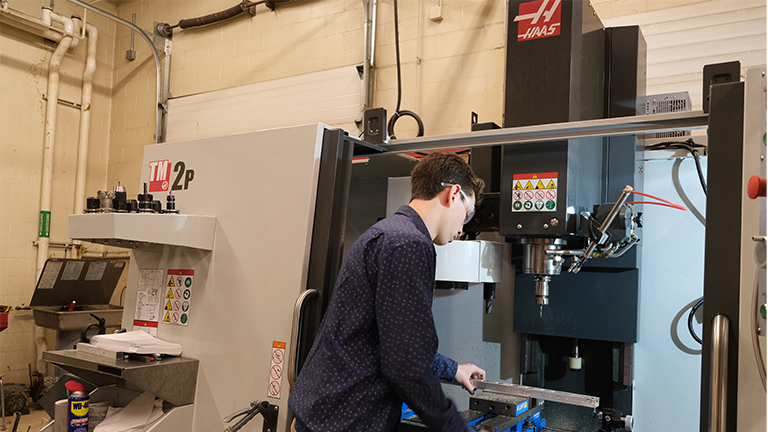 According to Lockwood, the machinery operated by students at Hemlock is very similar to the professional equipment he saw at Saginaw’s Fullerton Tool Co., where he worked last summer but didn’t operate machines. “Obviously, machines vary, but I would feel comfortable going into a machine shop if they had a Haas mill. I would be perfectly comfortable running it proficiently, and that’s just because of the experience I’ve had,” he says.

Currently, Lockwood is midway through his pursuit of Haas certification. “I’m working an hour a day on it, plus outside of school,” he says. “And then once I get done with that I can actually get a certificate, and that’ll look great on my resume.”

Another thing that will look great on his resume is the pre-engineering classes he’s taken at Hemlock. In fact, he says his acceptance by three colleges — Western Michigan University, Lake Superior State University and Michigan Technological University, his school of choice — is partly attributable to those classes, which will also be helpful for job-hunting. “A company sees pre-engineering, and that kind of wording gets people’s brains triggered, like ‘this kid knows what he’s doing,’” he says.

Lockwood credits his high school CAD instruction for, as he puts it, “getting my mind in a 3D space” to produce more than 3,000 personal protection equipment (PPE) devices for people on the COVID-19 front lines. “I don’t think I would have been able to do it if I hadn’t taken CAD,” he says. The PPE devices went to Sparrow Hospital and Covenant HealthCare in Michigan, as well as to medical institutions in New York and Baltimore. 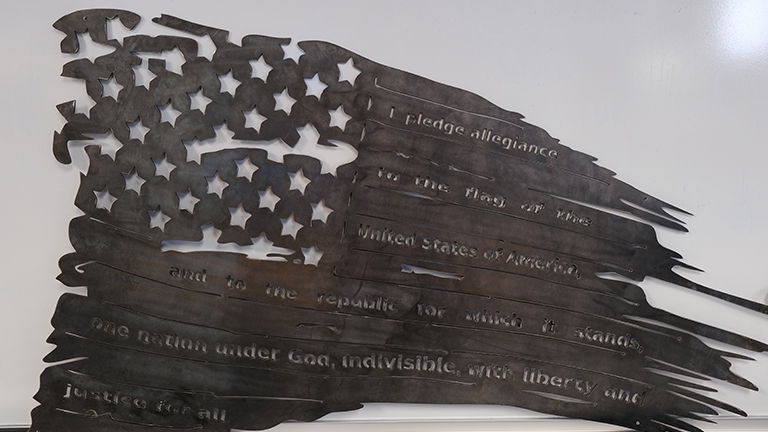 According to Lockwood, a 3D mindset is also helpful in his advanced chemistry classes and advanced physics classes. “You have to think in that space,” he says. “People might not see the effects of it, but it’s real. It helps throughout my school and in the outside world; it helps every day throughout my life.”

It even helps out with family members, like his grandmother. “She’ll ask me for advice on something,” says Lockwood, “and I’m like, that’s easy, I can just 3D print you a new part. I can cut a part out on the plasma cutter for you, or I can mill it out for you. It’s no problem at all — just because I have the sort of mentality that I can think about things in a three-dimensional way, and understand what I have to do.”

This summer, Lockwood hopes to land a machining internship. In the fall, he’ll head to Michigan Tech, where he plans to major in mechanical engineering. And then? “I would love to work for SpaceX after college,” says Lockwood. “That is a dream job, to go down and work for a big company like SpaceX, NASA or Tesla.”

But he’s also thought about working for Stryker, a biomedical company in Michigan. “That is a really cool field that interests me, and you’re still using skills that you used in high school — the CNC machine, the CAD, the plasma cutter. All the skills you learned in high school will transfer into the real world.”

Having worked at a tool shop last summer and currently taking shop classes in high school, Lockwood has firsthand experience with the world of manufacturing — and he’d like to correct the “dark and dirty” misconception that some people have about industry.

“I wear khakis and a dress shirt to school every single day, and I’m working in a shop,” he says. “The machine is clean, everything about it is clean.” He also praises his experience at Fullerton Tool last summer. “It was one of the cleanest shops I have ever seen,” he says. “There is not a speck of dirt around that place. Everything about that work environment is perfect.”

Lockwood landed the job after the president of the company saw him working on a CNC machine at Hemlock. “A high-schooler running a CNC machine was attractive to a president of a company, which I found awesome,” says Lockwood. “It was kind of like, whoa, this is a real need. People need students and high school kids who know how to run these machines.”

Learn how SME PRIME prepares manufacturing and engineering talent in high schools across the country.