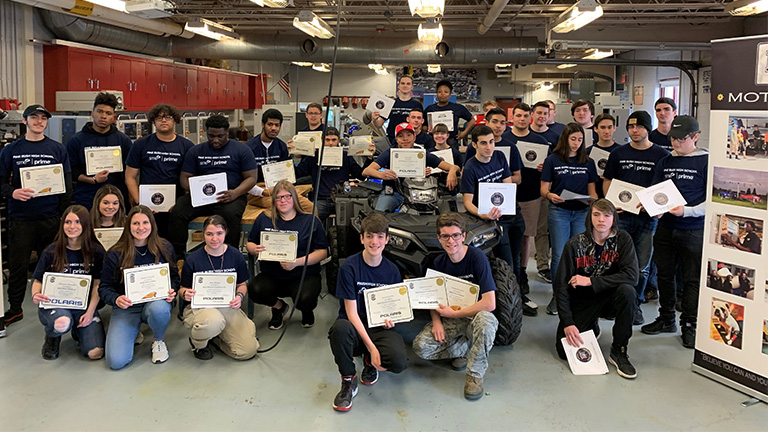 The SME PRIME (Partnership Response In Manufacturing Education) program at New York’s Pine Bush High School (PBHS) had just experienced what its principal, Aaron Hopmayer, called “the highest of highs” a day before COVID-19 shut down the school. On that day, 40 manufacturing students received industry credentials that would allow them to get a job pretty much anywhere.

But that didn’t stop Hopmayer and the school’s two PRIME program instructors, Kenny Marshall and Patrick Reiser. As Hopmayer said, “We don’t see obstacles, we see opportunities.” And right now they’re making the most of one of those opportunities — giving back to the community — by 3D-printing protective face shields with PBHS equipment acquired through SME PRIME and using designs provided by the engineering school at State University of New York (SUNY) New Paltz.

“It took us awhile, but we got the authority to take 11 3D printers and one laser printer off-site,” said Hopmayer. “They went to Pat’s and Kenny’s houses, and the two of them have been working 12- to 15-hour days printing these face shields.”

In a period of 11 days, they produced more than 1,275 face shields. And they’re still going strong.

Hopmayer provides Reiser and Marshall with supplies and distributes the finished face shields to local medical facilities such as hospitals, hospices and nursing homes. But he gives all the credit to the two instructors, saying, “These guys are where the rubber meets the road. These two make it happen.”

In addition to creating face shields for the community, Marshall — instructor for PBHS’s Excelsior engineering program and manufacturing academy, and secondary STEAM coach for the school district — is using the face shield design for his current online class project. But it’s been a challenge, as not all students have access to commercial AutoCAD software at home. 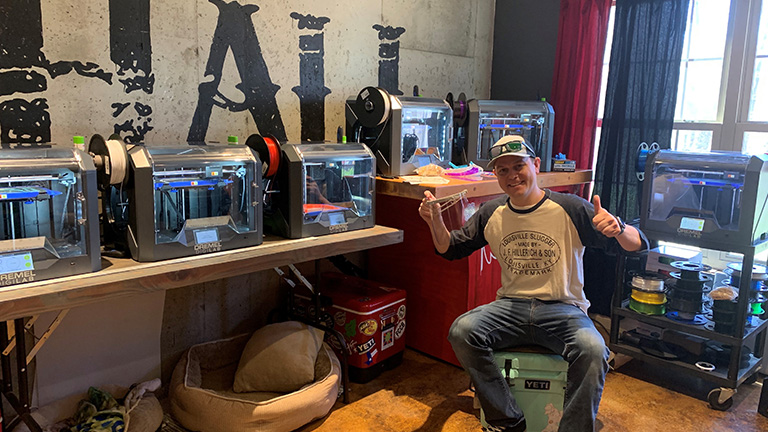 “They know AutoCAD so well,” said Marshall about his students. “We were running like a well-oiled machine until this thing hit. And then it’s like, what do you do? I have kids who have AutoCAD at home — it’s free to students — but some kids’ computers aren’t capable of running it.”

So instead, Marshall is using CAD software from Onshape, which he reached out to for support as soon as Pine Bush closed down due to COVID-19.

Reiser, who teaches classes in technology as well as design and drawing for production at the PRIME school, has also experienced challenges teaching online classes from home.

“The thing I’ve realized is that at school we have such an arsenal of tools, between CAD and the computers and the laser cutters and all the 3D printers. All those things have now effectively gone away, on top of the person-to-person interaction. The best thing we can do is figure out what students have access to at home, and then cater our instruction through those tools.”

He's also trying to keep the class light and fun while giving it meaning. “I think that’s the hard part, making sure everything has meaning and it’s not just busy work,” he said.

Despite the challenges, both Marshall and Reiser are committed to continuing Pine Bush’s PRIME program through online courses.

“These are the classes kids look forward to going to school for,” said Marshall, “and I’m not just saying that to toot my own horn. The everyday ‘chalk and talk’ is broken up by what we do, in the technology and the PRIME program, so you have to keep these things going. I’ve gotten emails; kids miss it.” Regarding reconvening in the classroom in the fall, Marshall said, “I can’t wait. I think we’ll come back even better. I think it was very easy for these kids to walk into our classrooms and take for granted what we actually have to offer, and now that that’s been taken away from them, when they come back I think they’re going to appreciate it more and want to do more.”

Hopmayer is also optimistic. “As far as I’m concerned, every day in these guys’ classrooms is something exciting,” he said, referring to Reiser and Marshall. “Everything’s authentic; there’s nothing canned. So I would imagine that by the time we get back to school the number of projects that these guys will have created will put us again on the forefront of where we’re going.

“The SME program, the PRIME initiative at Pine Bush High School, we have a lot of good things coming. You’ll hear about us in the future, I promise you that.”

Please help us one last time this year, as we continue to promote manufacturing and engineering, and advance STEM education opportunities to students across the country. Any size donation is appreciated; no dollar amount is too small.
Donate Now