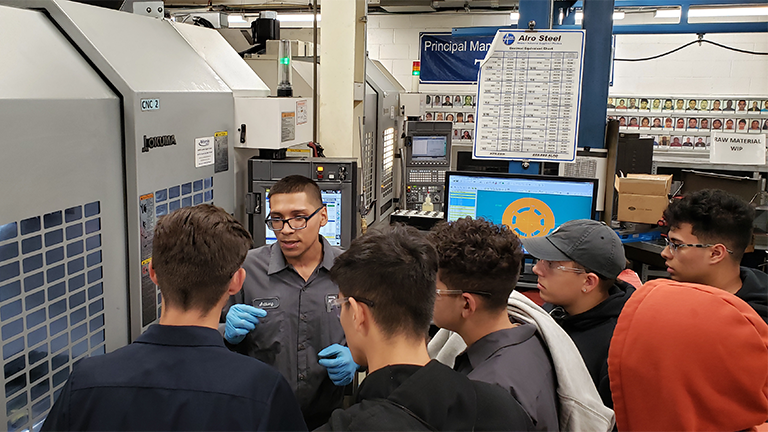 A combination of administrative, school board and community support — plus designation as an SME PRIME (Partnership Response In Manufacturing Education) school — have made the manufacturing education program a success at Leyden High School District 212, located in a northwest Chicago suburb.

Upon joining the PRIME network in 2016, the school received funding to purchase an injection molding machine, a TIG/MIG welding machine, and an automatic polishing and deburring machine — all of which allowed Leyden to introduce new manufacturing education methods that would teach skills needed by local employers. In 2018, the school received additional funding from PRIME for student outreach, and used it to fund supplies for summer camps.

“We’re really fortunate where we’re at,” says Michael Matticks, industrial technology department chair at Leyden. “We’re in a really heavily industrial area with a lot of businesses, and a lot of business tax dollars. So while we’re in a very blue-collar, lower-middle-class demographic area, we have a lot of resources as a district, so we don’t have to rely just on grant funds. We’ve always been in a really nice position where if we need something, we generally can get it supported by the district.”

Regarding the critical importance of administrative and board support, Matticks says, “Without that, it’s kind of hard to get anything done at any level. Right now, everybody wants to get a manufacturing program, and I get correspondence from different groups that I’m in, saying, ‘Hey, we started a manufacturing program, and we have one milling machine and a laser engraver.’ It’s like someone said, ‘We want this,’ but nobody really wanted to commit the massive amount of resources — people, money, space — to really build a good program. So they want the nametag without the true investment.”

In contrast, Leyden has shown true investment. “I think it’s a combination of things,” says Matticks. “Some schools might have the support but not the funding, and so it’s always a struggle to really get moving, or they’re working on archaic machines. We’ve been able to stay up-to-date, constantly updating equipment as needed, so I think it’s just a combination of all of that, that allows us to be successful.”

He also points to Leyden’s strong business partnership with a local advisory board of 20 to 30 companies, about 15 of which have been with the school for the past 30 years. “We work with these companies,” says Matticks, “They take our students, give them internships, give them apprenticeships, give them part-time jobs, and hire them on full-time after they graduate.” In fact, Leyden has placed two students in part-time positions with local companies during the COVID-19 pandemic. These types of partnerships allow Leyden to succeed in its mission to get students into viable career pathways right out of high school.

The Leyden School District’s interest in the PRIME program started after a member of the regional SME chapter — who was also a member of Leyden’s local advisory board — saw the potential of the district’s industrial technology program and urged its educators to apply for PRIME funding. “He said, ‘You guys are a shoo-in, you should definitely go for this,’” recalls Frank Holthouse, director of careers and community outreach at Leyden. At that point Leyden didn’t have the required engineering component, but around 2015 that changed, giving the school “all the pieces to the puzzle,” as Matticks puts it.

When asked to describe a Leyden manufacturing program success story, Matticks says he defines it right now in terms of a current student, a senior, who started off in the program his sophomore year, interned with a local partner that then hired him part-time, worked the entire summer between sophomore and junior year, and then worked 35-40 hours a week during his junior year while going to school full-time. He’s now enrolled in independent study and a work-study program, and is employed by one of Leyden’s local companies. “He’s not considered full-time yet,” says Matticks, “but there’s already talk as to where he’s going to go to further his education, and the company will be helping to take care of that entire bill. To me, that’s success.” 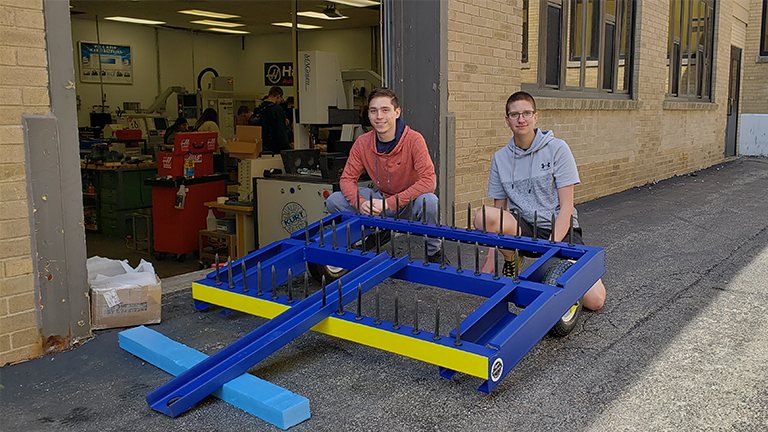 Holthouse agrees, saying, “We’ve had former students come back and talk to our kids, show off their nice new car or their paycheck. It’s pretty awesome, especially in the area that we serve. There are some families that are truly struggling, and we have had many students come back and say, ‘Hey, I’m making more than my parents combined.’ It really changes the outlook and trajectory for the rest of that student’s life, for their whole family, so we really see the positive benefits outside of helping our local community and helping our employers.”

To find out how your school can become part of the SME PRIME program, click here.