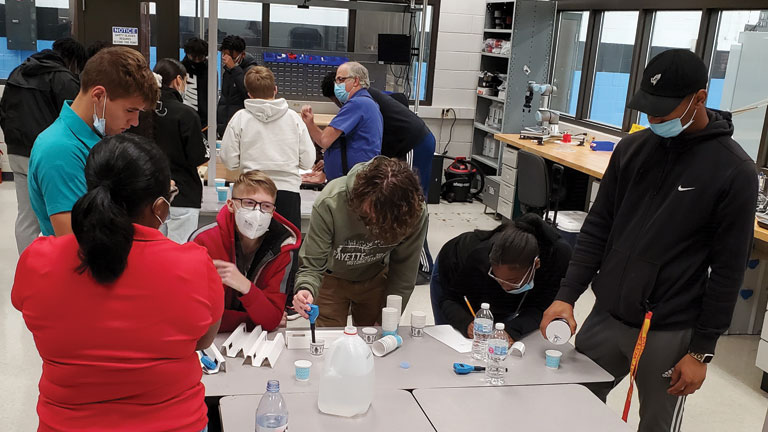 Dow’s supply chain exercise — which related to the logistical engineering supply chain management component of Saginaw ISD’s SME PRIME engineering pathway — took shape in the form of a game in which students had to ascertain supply and demand for cell phones.

Stages of the game included finding out how many phones were in stock, how many needed to be purchased, how much money was budgeted toward them, and where to buy them. “Based on the card they pulled, each group had a different path to take,” says Oliver Johnson, engineering instructor at Saginaw Career Complex.

By participating in the exercise, SME PRIME students learned the crucial role that supply chain management plays in product planning, design, manufacturing, and delivery to a final destination.

During their visit to the complex, Dow representatives told PRIME students about an opportunity called Academically Interested Minds (AIM), a collaboration between Dow and Kettering University that assists underrepresented students pursuing degrees in industrial engineering or analytical science. Students in the program take summer classes at Kettering while attending high school. Based on their scholastic performance, they can receive a full scholarship to Kettering, including tuition as well as room and board. AIM students can then pursue an engineering degree at Kettering while working in a co-op program at Dow. 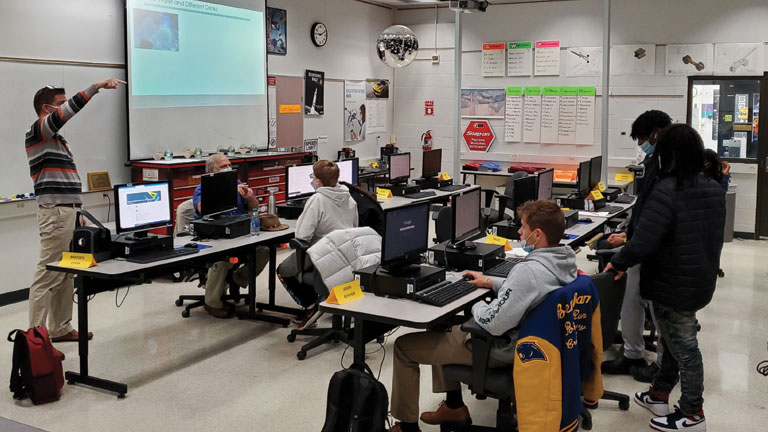 Dow representatives also told SME PRIME students about other co-op and internship programs that are open to any students pursuing industrial engineering or analytical science degrees. Students in those programs have the flexibility of attending any college, then doing a co-op or internship program at Dow during the summer.

In addition to the current partnership with Dow and planned partnerships with other local manufacturing companies, the Saginaw Career Complex has benefited from the SME PRIME program in other ways — such as new equipment and an emphasis on industry-recognized certifications.

“When I first started the program about four years ago, we had a lot of outdated equipment,” says Johnson. “We had two 3D printers that were operational. One of them broke during the school year, so I was down to just one 3D printer, trying to do everything on just that one piece of technology.”

The complex also now has Festo mechatronics stations, Haas CNC machines, Universal collaborative robots, and Snap-on precision measurement instruments such as calipers and micrometers — all of it provided by SME PRIME, and all of it used not only for classes, but also for professional certifications.

“We’ve been through three out of the six certifications already this year,” says Johnson, noting that the majority of his first-year students are getting certified. “They’re still taking the tests for the most recent certification, but prior to that 27 students were certified through that round of training.”

Learn more about SME PRIME’s future growth and how the initiative will expand in Michigan in 2022 due to a $6 million state appropriation.