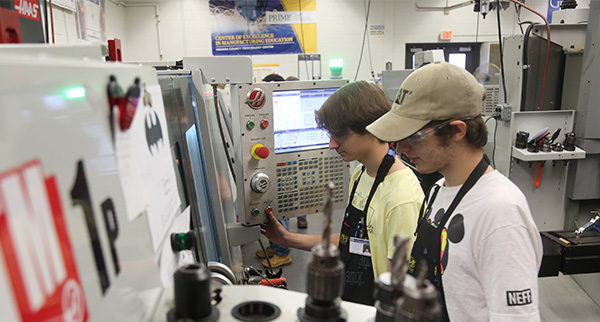 Being an SME PRIME (Partnership Response in Manufacturing Education) school has been extremely beneficial for the Indiana County Technology Center (ICTC) in west central Pennsylvania. After being named an SME PRIME school and receiving grant money, the school was not only able to purchase 3D printers, it was also able to update its curriculum to include a third-year enrichment program.

“We are doing STEM work every day, all day,” says Michael Rescenete, machining technology instructor at ICTC, which serves eight high schools in Indiana County. Students who enroll in one of the center’s 13 programs attend ICTC for half a day, every school day. In the first two years of the machining technology program, they undergo what Rescenete calls “hardcore, basic metal cutting operations” and blueprint reading, applied mathematics, safety procedures, and manual skills on milling machines, lathes, surface grinders, benches, grinders and drill presses.

In the third year, things group a notch. That’s when the enrichment program — or what some schools call advanced manufacturing — kicks in. “We didn't want to call it advanced manufacturing because it's a little bit more than just manufacturing for us,” explains Rescenete, a former CNC machinist who worked for Penn United Technologies for almost 11 years. “What it does is to allow our kids to have a career path with a couple of different directions.”

Within the enrichment program, students learn to draw in three dimensions, create two-dimensional blueprints and 3D-print a prototype of what they've drawn. “After the prototype comes out, we do an inspection on that part,” says Rescenete. “And then to complete the cycle, they have to manufacture some of these parts.”

As a prerequisite for entering the enrichment program, students must complete at least four of the National Institute for Metalworking Skills (NIMS) Level 1 credentials. They can continue finishing the other Level 1 credentials during their third year. Rescenete knows the importance of NIMS certification in the real world, having achieved Level 2 certification himself.

“We teach them the core fundamentals first, and then reward them with the advanced manufacturing enrichment level where they get to apply what they've learned as basic manufacturing skills,” he says. “And what a cool thing to see happen.” One of the places they get to apply what they’ve learned is their own community. For example, ICTC students took on a project for H&W Global Industries, a local company that offers metal finishing, electroplating and industrial coating services to aerospace and defense clients, among others. The company needed to sandblast one side of a missile without affecting the other part, so it came to ICTC for help. After two weeks of brainstorming, collaborating and doing research, the students came up with a solution. 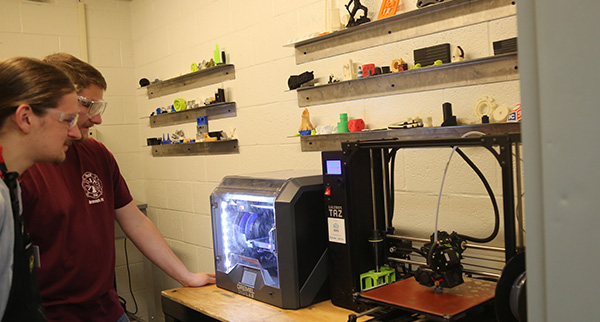 “We 3D printed a part that would wrap around the piece that needed protection and then presented them with the idea, and they loved it,” says Rescenete. “Of course, it wasn't perfect, but it did get them to think in different ways. And it's in production now, so that's pretty cool.”

Another community project that the center took on was for the local hospital, Indiana Regional Medical Center, which was faced with a problem when an old clamp came off a steam line. “if they took the steam line down, it would've cost a couple million dollars to put a backup steam line in,” says Rescenete. “So, we designed a clamp that would go over the steam line and be folded together.”

“I took it to the customer, and they loved it. We manufactured it out of stainless here in the shop, and we were able to present it to the hospital and save them time and money — and our kids got to be involved in it.”

ICTC has also become involved in narrowing the manufacturing skills gap in Indiana County by forming partnerships with companies such as Komatsu Mining Corp. “They're seeing the caliber of student coming out of here, and they're wanting us to pipeline to them, “ says Rescenete. “So, they came in and said, ‘OK, we need four spots filled. We'll interview all your kids and we'll take four out of here.’”

In order to gain support from local industries, ICTC invites them into the school, shows them what they’re doing, then asks for help with equipment or curriculum or new textbooks. “I can't just go buy a piece of equipment because it looks really cool and I think I can have fun with it,” says Rescenete. “We tailor the curriculum and the equipment in this shop to feed our local industries.” 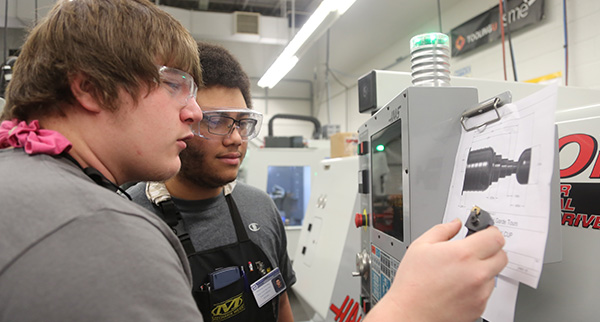 As far as recruiting students from Indiana County’s high schools into his machining technology program, Rescenete says it’s a challenge every year due to the lingering perception that manufacturing is dirty and sweaty and nasty. “So, we’ve got to put on a little dog and pony show, and we invite them in,” says Rescenete. “And then after the show is done, they sign up to come back here for what we call a job-shadowing or a career-shadowing day. They spend an hour with us, and we show them what metal removing is all about and how programming works and what we can do with these machines. And then they make their final decision.

More and more, Rescenete says, they are choosing to come to ICTC. And he thinks it’s because of the way the machining technology program is structured, with the enrichment segment capping it off. “It enables students to have that little carrot at the end of the stick. The kids are going back and saying, ‘Hey, look at this cool stuff I'm doing.’”