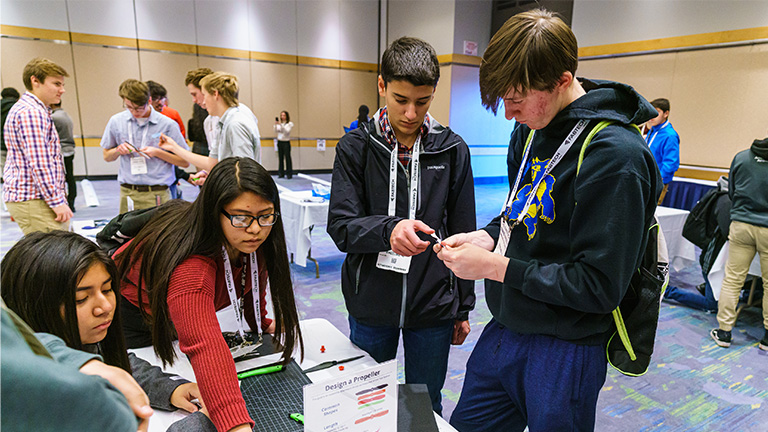 Students who are involved in the SME PRIME® (Partnership Response in Manufacturing Education) initiative at Wheeling High School (WHS) recently had the chance to relate their classwork to real-life industry by participating in a NASA HUNCH project and a FABTECH Student Summit.

“The FABTECH show floor tours were really awesome,” said Eric Race, technology education teacher at WHS, a suburban Chicago high school that was the second school to join PRIME when it was introduced in 2011. “Students got to see six-axis robots on the floor along with plasma cutters and CNC machines. I think it becomes a little less intimidating seeing those big machines when we have similar ones in our shop.”

Johnny O’Grady, a junior who is interested in mechanical engineering as a career, was among the WHS students who participated in the November 2019 Student Summit at FABTECH — North America’s largest metal forming, fabricating, welding and finishing event. “I talked to companies from all over the world,” he said about the event, which took place at McCormick Place in Chicago. “It was a really cool experience to see differences in manufacturing, and to see how machines are different and how they’re similar.” He also competed in the summit’s drone challenge, which he described as challenging.

Johnny initially became interested in manufacturing after hearing about a Robot Rumble competition that involved designing and building remote-controlled robots — otherwise known as battle bots. “I like working with my hands,” he said. “I didn’t know that this is what I wanted to do till I walked into that first meeting. It was nothing but positive.”

Johnny’s bot projects have progressed from freshman year, when he helped create a linear actuator-controlled lifter bot, to this year’s project, a wedge bot with a central spinner. “Hopefully it will come up from underneath and flip the other teams’ bots,” he said.

He’s also working on WHS’s new NASA HUNCH project, which involves the creation of parts. “We go into Inventor [software] and see how we want to manufacture them, then proceed with our final idea,” said Johnny. “Then we throw them into CNC lathes or mills, and mill them out. It’s a challenge because tolerances are so tight for those parts, and they’re really small.”

Race agreed that the NASA projects can be tough. “Kids go out there and read micrometers and calipers, real industry tools,” he said. “They have to measure tolerances, do QC, and learn about offsets, changing up the program and problem-solving.”

Lesly Hernandez, a senior at WHS, has also been working on a NASA HUNCH project — creating a handrail that follows NASA blueprints. “Once we have tolerance we put it in the ‘yes’ pile, and then we can continue with the next steps,” she said. “We made a little manufacturing layout of what we’re going to do — first the diameter, then the links, then a simulation process of sequencing scenarios.”

Originally a fine arts student at WHS, Lesly transitioned to engineering. Like Johnny, she is thinking of pursuing a career in mechanical engineering. “I kind of fell in love with the whole idea of problem-solving, and using all these different tools and machines,” she said.

Stemming from its designation as a PRIME school, WHS partnered with a local company that plans to use WHS as a pipeline for skilled manufacturing talent. Toward that end, the company provided WHS with money to purchase Haas milling and lathing equipment, along with four ABB six-axis industrial robots.

“We have a lot of great projects,” said Race, who is in his second year at WHS. A middle school program called Next Generation of Engineers brings 6th-, 7th- and 8th-graders into WHS after school, when they learn about laser cutters, plasma cutters and CNC mills. “It’s all real basic, just to spark interest,” said Race. “So when they come here as freshmen, they have an idea what they want to do post-high school, and we get them career-ready.”