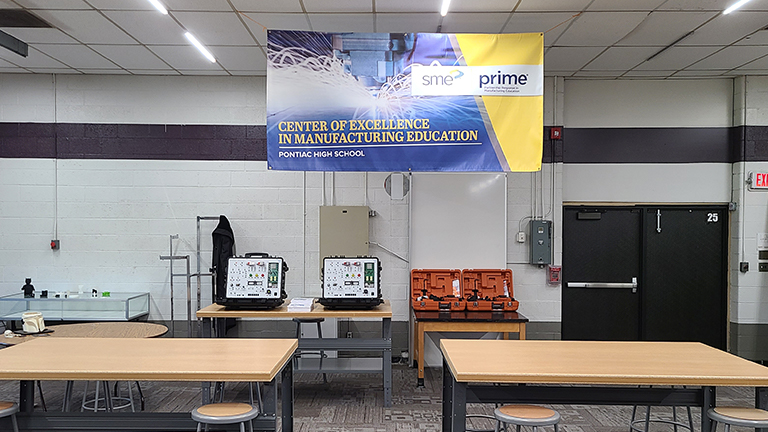 The future looks brighter for students at Pontiac High School (PHS) since their school was accepted into the SME PRIME (Partnership Response in Manufacturing Education) program. The school is part of a high school network that reaches over 60 communities in 22 states across the country including Romeo High School, Anna High School, Pine Bush High School and Grand Haven High School.

Located in an industrial Detroit suburb that suffers from the lingering effects of mid-2000s auto plant closings — and part of a school district that until recently was saddled with massive debt — PHS received a grant from PRIME that allowed it to create new manufacturing career pathways for students and purchase state-of-the-art equipment: a three-piece Festo MecLab, a Festo Didactic AC/DC Training System, a Verisurf part tester, a Starrett PMI kit, and a variety of hand and power tools from Starrett and Snap-on.

The PRIME initiative is part of a PHS recovery that includes new computer lab equipment, building renovations and science labs — providing a significant boost for a school where 85% percent of students receive assistance such as free or reduced-cost lunches.

“We don’t have a large population that has either the funding or the drive to go to college, but they have a lot of drive to have families and provide for them,” says Justin Brantley, manufacturing instructor at PHS, adding that the skills the PRIME program teaches will prepare students for work in the manufacturing trades — where a predicted workforce shortage will make jobs plentiful.

According to Brantley, the group initially came up with a list of skills they thought entry-level manufacturing employees should have, then rated the importance of those skills according to pressing needs faced by PHS’s industry partners . “We used that as a guide to work with Tooling U-SME to create the curriculum for our school,” he says, noting that PHS’s current curriculum includes CAD/CAM, and additive manufacturing, both core PRIME pathways, and industrial maintenance, which is an elective pathway.

At PHS, all PRIME programs span four years, from ninth grade through 12th grade. Each program features a tiered rollout of information and technology, so as students progress from year to year they get exposed to more and more tools. For example, ninth-grade students in the industrial maintenance program start off learning basic information about safety and regulations. In the 10th and 11th grades, they work with AC/DC motors, fluid powering systems, and bearings and seals, performing tasks such as welding, grinding, machining, fabricating and electronic circuitry.

In 12th grade, students have more leeway in their studies. Plus, they are provided with opportunities to become involved in co-op programs or internships and can also earn an SME Education Foundation Scholarship — leading to, as Brantley puts it, “a nice direct pipeline from what they’re learning in school to when they’re going into the workforce.”

Although the COVID-19 pandemic negatively affected the hands-on aspect of PHS’s new PRIME curriculum in 2020-21, Brantley is optimistic about the 2021-22 school year. “It feels like next year’s class of ninth-graders will probably get a way better experience,” he says. “It’s been kind of hard to balance the virtual aspect with the regular feel of what the class should be, and then finding the balance between what they need to know and what they could learn. It’d be much easier if you could just turn this wrench, and then they’d get a feel for it and it would be OK.”

When it comes to jobs that PHS’s graduating PRIME students will be qualified for and likely to pursue, Brantley says, “the sky’s the limit.”

“The focus right now, at least for industrial maintenance, is to have students get into jobs in regular maintenance of any of the machinery that’s going to be used for industry, and/or get into production of it,” he says. “I guess the scope of what they’re going to get into is going to depend on what their interest is, but our partners like Mahindra and Fanuc all have a large array of job opportunities.” 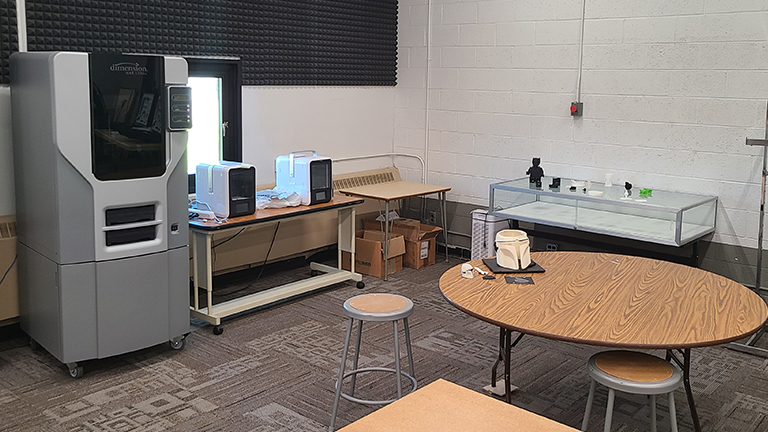 Referring to the expected increase of robots in production environments, Brantley says a job repairing robots could be as lucrative as being a plumber or electrician. “Electricians never run out of work, and they make a ton of money,” he points out.

On the other hand, Brantley says students following the PRIME CAD/CAM career pathway will most likely be focused on going into automotive engineering jobs or into regular parts manufacturing. “We’ve never offered any classes like that before,” he says, “so it’s kind of hard to say where they would go.”

Wherever they end up going, Brantley says the PRIME program is designed to help them get there. “It’s potentially giving them a lifeline and a direct route to a higher income level that they might not have seen around here in quite some time.”

Learn how you can bring PRIME to a high school in your community.